A Few Thoughts on Privacy in the Age of Social Media

Everyone already knows there are privacy issues related to social media and new technologies. Non-tech-oriented friends and family members often ask me questions about whether they should avoid Facebook messenger or flashlight apps. Or whether it's OK to use credit cards online in spite of recent breach headlines. The mainstream media writes articles about leaked personal photos and the Snappening. So, it's out there. We all know. We know there are bad people out there who will attempt to hack their way into our personal data. But, that's only a small part of the story.

For those who haven't quite realized it, there's no such thing as a free service. Businesses exist to generate returns on investment capital. Some have said about Social Media, "if you can't tell what the product is, it's probably you." To be fair, most of us are aware that Facebook and Twitter will monetize via advertising of some kind. And yes, it may be personalized based on what we like or retweet. But, I'm not sure we fully understand the extent to which this personal, potentially sensitive, information is being productized.

Here are a few examples of what I mean:

I recently viewed a product marketing video targeted to communications service providers. It describes that massive adoption of mobile devices and broadband connections suggesting that by next year there will be 7.7 billion mobile phones in use with 15 billion connections globally. And that "All of these systems produce an amazing amount of customer data" to the tune of 40TB per day; only 3% of which is transformed into revenue. The rest isn't monetized. (Gasp!) The pitch is that by better profiling customers, telcos can improve their ability to monetize that data. The thing that struck me was the extent of the profiling. 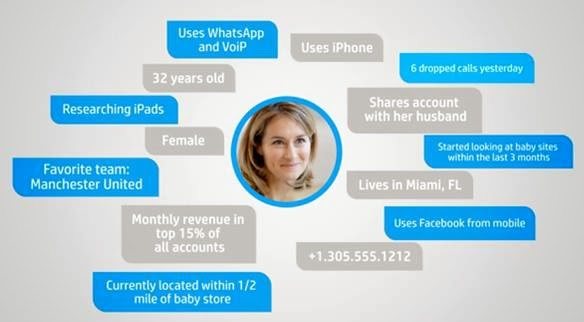 As seen in the screen capture, the user profile presented extends beyond the telco services acquired or service usage patterns into the detailed information that flows through the system. The telco builds a very personal profile using information such as favorite sports teams, life events, contacts, location, favorite apps, etc. And we should assume that favorite sports team could easily be religious beliefs, political affiliations, or sexual interests.

On October 29, IBM and Twitter announced a new relationship that enables enterprises to "incorporate Twitter data into their decision-making." In the announcement, Twitter describes itself as "an enormous public archive of human thought that captures the ideas, opinions and debates taking place around the world on almost any topic at any moment in time." And now all of those thoughts, ideas, and opinions are available for purchase through a partnership with IBM.

I'm not knocking Twitter or IBM. The technology behind these capabilities is fascinating and impressive. And perhaps Twitter users allow their data to be used in these ways by accepting the Terms of Use. But, it feels a lot more invasive to essentially provide any third party with a siphon into the massive data that is our Twitter accounts than it would be to, for example, insert a sponsored tweet into my feed that may be selected based on which accounts I follow or keywords I've tweeted.

I recently opened Facebook to see an updated list of People I may know. Most Facebook users are familiar with the feature. It can be an easy way to locate old friends or people who recently joined the network. But something was different. The list was heavily comprised of people who I sort of recognize but have never known personally.

I realized that Facebook was trying to connect me with many of the people behind the accounts I follow on Instagram. Many of these people don't use their real names, talk about their work, or discuss personal family matters on Instagram. They're photographers sharing photos. Essentially, they're artists sharing their art with anyone who wants to take a look. And it feels like a safe way to share.

But now I'm looking at a profile of someone I knew previously only as "Ty_Chi the landscape photographer" and I can now see that he is actually Tyson Kendrick, retail manager from Chicago, father of three girls and a boy. Facebook is telling me more than Mr. Kendrick wanted to share. And I'm looking at Richard Thompson, who's a marketing specialist for one of the brands I follow. I guess Facebook knows the real people behind brand accounts too. It started feeling pretty creepy.

What does it all mean?

Monetization of social media goes way beyond targeted advertising. Businesses are reaching deep into any available data to make connections or discover insights that produce better returns. Service providers and social media platforms may share customer details with each other or with third parties to improve their own bottom lines. And the more creative they get, the more our sense of privacy erodes.

What I've outlined here extends only slightly beyond what I think most people expect. But, we should collectively consider how far this will all go. If companies will make major financial decisions based on Twitter user activity, will there be well-funded campaigns to change user behavior on Social Media platforms? Will the free-flow exchange of ideas and opinions become more heavily and intentionally influenced?

The sharing/exchanging of users' personal data is becoming institutionalized. It's not a corner case of hackers breaking in. It's a systemic business practice that will grow, evolve, and expand.

I have no recipe to avoid what's coming. I have no suggestions for users looking to hold onto to the last threads of their privacy. I just think it's worth thinking critically about how our data may be used and what that may mean for us in years to come.
at 10:02 AM No comments:
Labels: Consumer market, privacy, social media
Newer Posts Older Posts Home
Subscribe to: Posts (Atom)